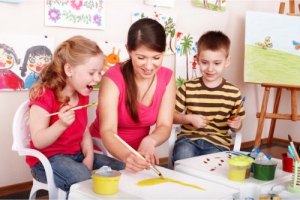 Tender Years Childcare is a family owned and operated day care center in Bronx, NY. Since 1996 we have been dedicated to providing a nurturing, safe and clean environment for infants up to pre-kindergarteners. As a Christian-based childcare, we encourage enhancing each child’s independence, confidence, communication and decision-making skills with fun and creative activities.

Mr. Ruben is the founder of four very successful non-profit organizational programs.
The organizations and groups are geared towards kids, teens at risk, and people with disabilities. He has volunteered and served as counselor / advocate for the board of education and other organizations in the tri-state area. As a disabled athlete, most of his accomplishments have been due to his involvement through sports and recreation. Mr. Ruben was the founder and director of Gods Creation Childcare Center, LLC. For many years, Ruben started out with struggles to strive like everyone else, however his effort to want to make a noticeable positive difference in people’s lives made him a unique candidate for a role in leadership. His envolvement with non profit organizations lead him to be promoted to director as he collaborated in various programs he participated in. His community evolvement has earned him the respect as a leader from his peers.

There is so much to say about Ruben that we would have to write a book of his life accomplishments.

Since childhood, he has been an inspiration and leader to individuals who know him… His aim and passion has been to motivate and advocate for children and individuals who may believe they have an impairment to succeed. He wants to explain how he has overcome the so-called “impossible to achieve goals” that life brings to people with a mental, physical or economic challenge. “Without God’s grace over me, I would have not been able to accomplish anything, He has given me the strength to overcome all of my obstacles and I recognize that He deserved all the glory for all my accomplishments ”

He obtained his Directors Credentials to operate childcare centers. When Mr. Ruben started Tender Years, his children were toddlers. Now, he is a proud father of a beautiful young lady named Stephany and a handsome young man named Brandon.

The curriculum at Tender Years Childcare is rooted in national standards and designed around local education guidelines to ensure the program content meets the cognitive, social, physical, and emotional needs of each child. Our school is lead by professionals who have the highest commitment to the success of young children and a passion for serving each child and their family. Above all, the teaching team abundantly provides families, children, and each other with love and kindness in all interactions, communications, and thoughts.

SEND US A MESSAGE